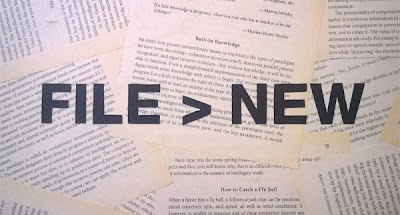 Today, this first day of 2014, I decided to do something I’ve been meaning to do for quite a while – create some hand crafted art for the hell of it. That’s what the image above is.
Most applications from Photoshop to Word start a new document by going to the “File” menu and choosing “New”. I found it oddly refreshing to take that concept offline and cut letters out with an X-acto knife. Here’s to all the new beginnings and blank documents this year will open for each of us.
It’s hard to believe 2013 already came and went. Here’s a recap of all the eLearning related milestones I reached last year:
Despite my full time job, a steady stream of freelance projects, and family responsibilities, I somehow also managed to publish 9 writings in the past year.